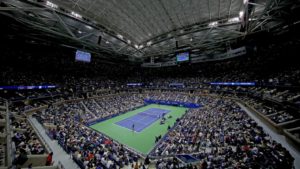 Happily, there were downpours before the main event which cleared the air.

The ATP organised various fundraising events, donating over £5 million to bushfire relief. The players themselves pledged Aus$100 for every ace served, an idea Nick Krygios came up with – he’s not such a bad boy after all.

This year was the 50th anniversary of Margaret Court winning the Grand Slam. Tennis’s “crazy aunt” as John McEnroe calls her, is a somewhat divisive figure. A senior pastor, in response to same-sex marriage she once stated:

If it weren’t such dangerous stuff, it’d be funny.

So what was Tennis Australia to do? They couldn’t just ignore her achievement. So there was a ceremony, to muted applause but, sensibly, she wasn’t given the microphone. Who knows what she might have said?

After their Seniors match, Martina Navratilova and John McEnroe unfurled a banner, demanding a name change to the Margaret Court Arena, and climbed up onto the umpire’s chair to say a few words about “crazy Margaret” – the mic. was quickly turned off and they were reprimanded, but they had made their point. 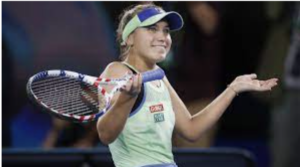 In the women’s event:

15 year old Coco Gauff, the youngest player in the draw,  repeated her Wimbledon win over Venus Williams in a much-anticipated match in the first round. She went on to beat holder Naomi Osaka, sweet revenge for being slaughtered by her and reduced to tears at the US Open.

Serena Williams wore something approaching normal tennis gear for a change – neither catsuit nor tutu. She lost in a close three-setter to the Chinese player Qiang Wang.  Williams is now 38 years old. Is she ever going to equal Margaret Court’s singles record of 24 Slams? I really hope so. I’m not keen on Williams but Court is just beyond the pale.

The unseeded Tunisian, Ons Jabeur, had a great run to the fourth round, beating former semi-finalist Johanna Konta on the way. Jabeur has wonderfully soft hands and would be a joy to watch if she weren’t so miserable on court. She beats herself up every single time she loses a point. She doesn’t even look particularly happy when she wins one.

Aussie world no 1, Ashleigh Barty, is the darling not just of the tennis fans but also, it would seem, most of Australia.

Her variety is quite wonderful; a sliced single-handed backhand that floats tantalisingly and then digs into the court, followed by a thwacking double hander – opponents must find it very hard to find a rhythm against her.

In the semis she played the extremely feisty and somewhat hyper American, Sophie Kenin, who didn’t seem at all fazed by the fact that 99% of the crowd was against her. Barty served for the second set but didn’t close out, much to the disappointment of the crowd.  I would have loved to have seen Barty take a home Slam. Maybe the pressure was just too much for her.

Former Slam winner, Garbina Muguruza has had quite a resurgence since teaming up with her new coach, Conchita Martinez, and got all the way to the final.

She beat Simona Halep in the semis in a total shriekfest of a first set. And then they went quiet in the second. Had they developed polyps on their vocal cords? It was quite strange but also a relief. I just can’t stand watching those women players who scream every time they hit the ball. Yes, a lot of the men grunt but it’s nowhere near as irritating.

Muguruza rather lost her nerve in the final, serving three double faults in the final game. Kenin couldn’t put a foot wrong. I was rather sad. I love Muguruza when she doesn’t scream.

In the women’s doubles, French player Kristina Mladenovic teamed up with Timea Babos to win the title.

The local men had a good run. John Millman took Roger Federer all the way to a tiebreak in fifth set where he led 8-4 and somehow lost the match.

Federer also came back from the dead against a man with the improbable name of Tennys Sandgren in the quarters, saving seven match points. In the process, Federer was warned for an “audible obscenity”. Federer swearing??

Frenchman Gael Monfils did well to reach the fourth round, but was then totally outclassed by Dominic Thiem. Monfils is a wonderful player with a varied game and sprints around the court with ease but he just doesn’t have what it takes to be right at the top. Maybe it’s a mental thing.

The much anticipated grudge match between Nick Krygios and Rafael Nadal lived up to expectations.  Krygios has consistently wound Nadal up, off and on court. He can behave badly, taunting umpires, “tanking” matches, but he played a fantastic match and didn’t fool around.  He lost to the Spaniard in a really tight four-setter. Krygios is so exciting and so talented. I wish he’d knuckle down. But he admits to getting lonely and bored by the grind of the singles tour. He’s a great team player – maybe he should have taken up basketball.

Dominic Thiem beat an extremely ratty Nadal in the quarters and went all the way to the final where he faced Novak Djokovic who had dispatched Federer with ease in the semis in a rather muted match. Federer was clearly exhausted by his efforts in earlier matches.

So, Thiem vs Djokovic in the final. “This is going to be really predictable” I thought. Thiem had incredibly tight matches earlier in the draw and was surely both mentally and physically done in. Djokovic had more or less skipped his way to the final with the loss of just one set. He had murdered Nadal in the previous year’s final and had held this title seven times. He loves the surface. This was Thiem’s maiden Aussie final.

Much to my astonishment, he took the Serb all the way to a final set. Djokovic finished it off 6-4 in the fifth set, but he must have been a bit shocked by the tenacity of his opponent.  I love the quirkiness of both Thiem’s game and personality. I really hope he takes over and wins Slams in the future.

Good news for the Brits. in the men’s doubles where Joe Salisbury teamed up with his American partner, Rajeev Ram, to take the title.

Next up, the French Open in May. I can’t wait…