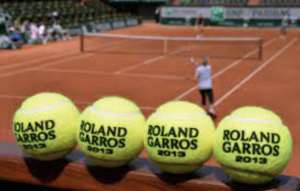 Rafael Nadal and Novak Djokovic were the frontrunners this time with Roger Federer a close third.

It was Federer’s first time on clay in three years and it seemed an odd decision for him to enter the tournament considering this isn’t his favourite surface. The French Open is also a gruelling event – would this stuff up his chances of winning on the grass at Wimbledon, where he’s had the most success? 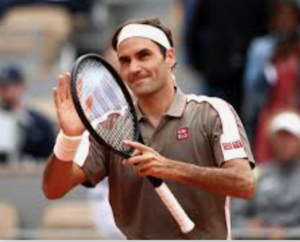 Talking of Federer, since he’s moved from Nike to Uniqlo, his look has gone distinctly down-market. In Paris, the colour of his shirt resembled that of a pale turd. Oh dear, what’s happened to our suave Roger?

Nick Krygios pulled out, which was probably just as well, since the French crowd, always a tough one, would have bayed for blood after the Aussie recently declared that the French Open “sucked”. He also called Djokovic “cringeworthy” and Nadal “salty” (that’s not a compliment by the way).  Krygios is definitely entertaining and hugely talented but he’s also pretty self-destructive. Perhaps tennis is too genteel a sport for him.

One of the match-ups of the tournament lived up to expectations; 20 yr old Stefanos Tsisipas vs the wily former champion, 34 yr old Stan Warwinka. “Stan the Man” came through in five sets but he was a touch lucky. Tsitsipas was probably the better player, but Warwinka managed to win the clutch points. The young Greek went a bit crazy, smashing water-bottles, whacking balls out of the stadium with swearing aplenty. For a player whose stated ambition is to be “happy, humble and polite”, it was out of character.

Next up in another highly-anticipated match was Warwinka vs Federer. Federer came through in four sets in a stunning display of shot-making from both men.

Djokovic gave Alexander Zverev a lesson on how to play on a clay court, as did Dominic Thiem against Karen Khachanov.  Zverev, who has been frequently tipped to become the next world number one, still hasn’t made it past the quarters in a Grand Slam.

The top four seeds made it through to their appointed spots which meant Thiem vs Djokovic and Federer vs Nadal in the semis.

Nadal did, as expected, beat Federer in straight sets but the Swiss player certainly didn’t disgrace himself.

Thiem vs Djokovic was a close one, with Thiem winning in five tight sets to go through to the final. Novak was pretty bad-tempered throughout, frequently making sarcastic remarks to the umpire, something one would never see from Nadal or Federer. If Djokovic wants so badly to be liked, as appears to be the case, perhaps he should take a look at the recording of that match.

The Thiem vs Nadal final should have been much more exciting than it was, and although the first two sets were close, Nadal breezed through the final two 6-1 6-1.

So, Nadal won his 12th French Slam, losing only two sets in the whole tournament, an incredible feat. It’s unlikely we will ever again see such domination at this event.

But when will the Nadal/Djokovic/Federer stranglehold be broken by the younger players? Tsitsipas, Thiem, Zverev, Shapovalov and a few others seem the natural players to shake up the status quo. Much as we all admire the top three, it is time for new players to step up and take the game forward.

Naomi Osaka, world number one and winner of the previous two Slams, the Australian and American Opens, lost in the third round to Katerina Siniakova.

What has happened to Osaka? Since she mysteriously split with her coach, Sascha Bajin, with whom she had a hugely successful partnership, she seems to have fallen apart.

Serena Williams lost in a tight match in two sets against Sofia Kenin. When Serena is involved, there’s always drama and screams and what Kenin described as “death stares” – when Williams is losing, she goes quite bonkers. I can’t bear the woman but she’s definitely entertaining.

As ever, there was some “Serena controversy” after her loss. She obviously wanted to get out of Paris as soon as she could but it was at the expense of poor Dominic Thiem being booted out of the main press room, cutting short his interview. He was pretty peeved – to be fair, it may not all have been Serena’s fault but more that of the organisers, but it didn’t look good.

There was a great quarterfinal between Czech teenager Markéta Vondroušová and Petra Martic. I wanted Martic to win, partly because of her fantastic crunching overheads, but also because she has a female coach, almost unheard of on the tour, but her nerve failed at crucial moments.

In another quarter final, title holder Simona Halep was thrashed by 17 yr old American Amanda Inisimova in straight sets. The young American was fearless and walloped the ball, rather in the manner of another teenager, Jeļena Ostapenko who sensationally won this title against Halep in 2017. 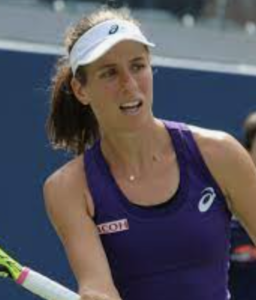 The main story of the Brits was Johanna Konta – previously, she’d never won a match on the Roland Garros clay. This time she went all the way to the semis where she was up against Vondroušová. The match was played in horribly blustery and drizzly conditions at 11.00 am on an outside court, notable for the lack of spectators.  This bizarre treatment of the women’s scheduling was due to the tournament losing a previous day to rain, but it should have been handled better. It was insulting to the players.

Konta should have made it through.  She had a sitter at set point in the first and blew it, and from thereon was riddled with nerves, losing in straight sets. She must be kicking herself.

In the other semi, the Australian, Ashleigh Barty, beat the other teenage wonder, American Amanda Ansimova. in a tense three setter.

In the final, Barty won a disappointingly one-sided match against Vondroušová 6-1, 6-3 in little over an hour. The spectators must have felt short-changed. I feel strongly that the women should play best of five from the quarters onwards so this doesn’t keep happening in the latter stages when ticket prices are expensive and prize money gets serious, but that’s a whole other article!

A popular winner, Barty is a wonderfully fluid player with fantastic variety.

She’s a pretty good all-round sportswoman, being a former professional cricketer and a 6-handicapper at golf.

A nervous Gael Monfils lost in three straight sets to Dominic Thiem and Jo-Wilfried Tsonga lost in a tight four-setter against Nishikori.

But the biggest story of the French players was the match between Benoit Paire and Kei Nishikori – an absolute cracker, with spectators going crazy. Paire served for the match in the fifth set and then blew it with double faults and inadvisable dropshots.

Actually, Paire going out in such an amazing match was perhaps a good thing since his next opponent would have been against Rafa Nadal and Paire would probably have been humiliated.

The French women didn’t feature heavily in the singles tournament but there was great success in the doubles event, with Kristina Mladenovic winning the title with her partner Timea Babos. Mladenovic is now the world number one female doubles player, a huge achievement. 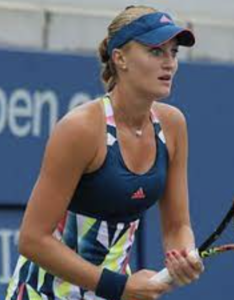 It was a shame to see the show courts almost empty so much of the time, unless of course Federer or Nadal were playing.

But it’s funny how the upper tier “cheap seats’ are always full.  I’m sure we all have our theories on that one, but you’d never see so many empty seats at Wimbledon.

Talking of which, we are now into the grass court season. Andy Murray won’t be playing in the singles at Wimbledon but he’s testing out that resurfaced hip at Queen’s, partnering Feliciano Lopez in the doubles. We’ll see if it’s the start of a much hoped-for recovery.

I imagine Djokovic is the odds-on favourite for Wimbledon. I hope I’m wrong since we do need a change but it’s hard to see who can beat him. Oh, hang on – maybe Federer or Nadal??

Katrina Allen is a former Junior Wimbledon and senior tournament player. She also played real tennis, the original form of the game, at top level. She is a regular visitor to the Languedoc.