Remember 15 year-old Coco Gauff? She was the darling of the Wimbledon crowd earlier this year and she was so again in New York, her home Slam.

She got through two seriously tense and exciting rounds to reach the last 16 where she came up against Naomi Osaka, the title holder and world no 1. No doubt, most remember that Osaka beat Williams last year in a match of huge intensity and drama where Williams hurled abuse at the umpire and was rightly punished for doing so. 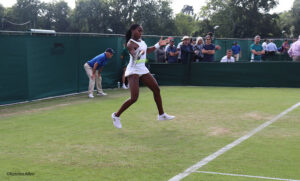 Osaka demolished poor Gauff in straight sets, with crunching groundstrokes so heavy you could hear them thudding off the racket. The match ended with Gauff in tears. It was painful to witness but Osaka hugged her opponent and persuaded her to do the on-court interview rather than ‘cry in the dressing room’. After, Gauff said of Osaka: “I think she just proved that she’s a true athlete. For me the definition of an athlete is someone who on the court treats you like your worst enemy but off the court can be your best friend. I think that’s what she did tonight.

However, Osaka went out rather tamely in the following round to Swiss player, Belinda Bencic, in two easy sets.  She hasn’t had a good year and it’s surprising she got so far in the tournament.

British player Johanna Konta went out to Elina Svitolina in the quarters.  She blew a crucial forehand volley exactly as she had done at crucial points at both Roland Garros and Wimbledon. Konta appears to analyse too much and looks so mechanical that when she misses it looks like a howler. She’s so tense I find her exhausting to watch. If she loosened up a bit she could perhaps win a Slam one day but I’m not sure that’s ever going to happen.

Another promising young player, Taylor Townsend, battled through qualifying and got all the way to the last 16, a fantastic achievement. She beat former Slam winner and fifth seed, Simona Halep, along the way. Townsend is what one might describe as ‘chunky’, to the extent that the USTA refused to sponsor her travel when she was a junior unless she lost weight– how humiliating for a teenager. But as both Serena Williams and Lyndsey Davenport said (they have also had to suffer pretty cruel remarks about their weight), players come in all shapes and sizes. Townsend has a wonderfully refreshing serve-and-volley game with which she dismantled Halep, although it looked like a suicide mission against Bianca Andreescu. She finally woke up to the fact that she was getting passed over and over and stayed back more and managed to at least take a set.

And who is Andreescu?

She is a 19-year-old hard-hitting Canadian who appears to have no nerves. In the final, she dismantled Serena Williams in straight sets despite some 23,000 fans roaring for Serena. At one point, the crowd was so raucous in their support for Williams that the teenager covered her ears to block out the noise. It was a pretty impressive win, considering.

Bianca Andreescu is Canada’s first ever Grand Slam winner. The Canadian federation is doing something right. Apart from Andreescu, they now have Raonic, Shapovalov and Auger Aliassime, all top players.

Will Williams ever win that elusive 24th Grand Slam to equal Margaret Court’s record? At both Slam finals in the last year she has looked invincible along the way and then crumbled at the final hurdle, each time losing in straight sets. She hasn’t won one since Australia 2017. It surely has to be a mental thing. It appears now to be a case of if, not when, she wins another one. As always, her sartorial choice was rather mad; this time, a black catsuit with shorts so tight that she kept tugging at them since they were constantly riding up. How can that be comfortable to play in? Perhaps someone had a word with her about that since she changed into a far more flattering outfit for the final. Though it was bright purple; of course it wouldn’t be just a ‘normal’ tennis outfit, would it?

The women’s tour is in fine shape, with a host of young and exciting players, many of whom are unafraid to attack from the net. Osaka, Barty, Andreescu, Gauff, Townsend and the list goes on…

It’s a refreshing change from past players who just slugged from the baseline.

The firm favourite, Novak Djokovic, pulled out with a shoulder injury, leaving the event wide open for Roger Federer and Rafael Nadal.
tennisnet.com

Fifth seeded Dominic Thiem, who is seen as one of the natural successors to the ‘Big Three’, surprisingly went out in the first round, as did another promising youngster, Stefanos Tsitsipas. Alexander Zverev also went out early on. Zverev, such a hugely talented player, keeps losing early in the Slams. He seems to have some sort of mental block. Here’s a weird stat. which rather proves it: over 50% of the time at break point against him, he double-faults.  His coach, Ivan Lendl, who was so successful in his partnership with Andy Murray, has finally given up on him. If he can’t win a Slam working with Lendl, how is he ever going to do it? 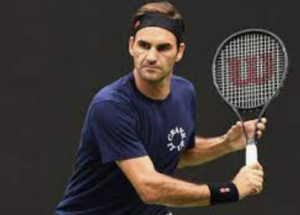 My heartthrob, Roger Federer, was up against Grigor Dmitrov (aka ‘baby fed’). It was, of course, a pretty match between, yep, two pretty players. I settled back with a glass of wine and swooned over Roger’s beautiful ground strokes and then the unthinkable happened… Oh hang on, surely not… Roger went and lost in the fifth set – maybe he was over-excited at the thought of Djokovic having pulled out and had his eye on the prize, looking too far ahead in the draw, always a dangerous thing to do.

Frenchman Gael Monfils threw up a surprise, getting to the quarters. In the last 16,  he hammered poor Pablo Andujar so comprehensively and hit such perfect shots that his opponent just laughed at his opponent’s brilliance throughout the third set. It’s all he could do really.

Monfils’ next match, against 23-year-old Italian Matteo Berrrettini (6’3” and built like a bull), was sensational and filled with drama – there was no clue as to who was going to win until the very last point. It was 7-6 in the fifth to the Italian. Berrettini was so wracked with nerves on his first match-point that he served a second serve half way up the net, but somehow managed to clinch it in the end.

Predictably, Berrettini lost to Rafael Nadal in straight sets in the semi- final.

Nadal’s opponent in the final was Daniil Medvedev. The young Russian has incredibly unorthodox strokes and a devastating first serve. He had previously deliberately wound up the crowd, appearing to relish the boos. In fact, he said that they spurred him on. After he won his third-round match he sarcastically said in his on-court interview “Thank you all, guys, because your energy tonight gave me the win … I want all of you to know, when you sleep tonight, I won because of you.” Don’t we all love a bad boy?

Nadal appeared to be cruising at two sets and a break up in the third. And then Medvedev woke up. He clinched the third and fourth sets to massive cheers from the crowd. The crowd, who had booed him so raucously in the early rounds, was now chanting his name. Nadal finally conquered his nerves and took the fifth 6-4, managing to save break point in the final game.

Rafael Nadal now has nineteen Grand Slam titles, just one behind Roger Federer. I bet he overtakes him.

The ‘Big Three’ have now shared the last 12 Grand Slam titles. Between them, they have also won the last 51 out of 56. Crazy eh? We keep saying the stranglehold will be broken, but when?

By Katrina Allen, videos ABC News and US Open
katrinaallen.co.uk