A Kid in Sport Stays out of Court

This article appeared in the Wild Tomato Magazine, Nelson, N.Z. where I lived for a number of years.

A Kid in Sport Stays out of Court – Wild Tomato Magazine; by Katrina Allen.

I recently spotted a slogan on some dilapidated wall on Rutherford Street: “A kid in sport stays out of court”. That saying may be old hat to Kiwis but it struck a chord with me. 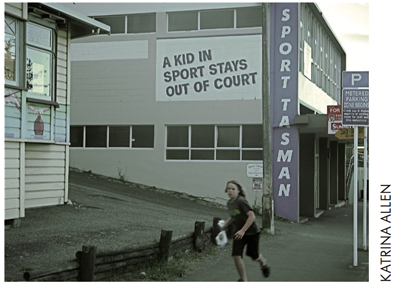 I was reminded of that slogan a few days later while I was playing a gentle game of tennis doubles at the courts in Richmond. I later learned that this was, in fact, the main Nelson tennis training centre for the juniors. On the court next to us there were four teenage boys also playing doubles. However, their game was somewhat more energetic; grunting in theatrical fashion with every stroke and grinning broadly when they outwitted one another with a cunning passing shot. They could have saved a good deal of energy and played a little more within themselves but that wasn’t really the point. They were having a great time and ridding themselves of a huge amount of testosterone into the bargain. They probably had no need to get ‘hammered’ down Bridge Street that night.

The thing about sports like tennis is that you can play them into your dotage. With team sports like rugby or soccer, for example, kids get beyond school years and then usually just stop, unless they are particularly talented and, let’s face it, most of us aren’t – which means sporting activity often goes out the window and Bridge Street beckons.

With tennis all you need is one opponent, a racket, a few balls, and a court, of which there are a number of free public ones around Nelson.

So, having just arrived in Nelson, I wondered why those free courts were so under-utilised.

Most of our friends had young kids and they were really keen for them to get involved in tennis but there seemed to be very few coaching opportunities. OK there was one great coaching weekend for kids in which I helped out but that wasn’t repeated the following year.

And then I heard through the grapevine that a new tennis coach with the rather grand title of ‘Tennis Development Officer’ had arrived to try and do something about all this – her name was Lynnie Nevin. A few weeks later I heard that was she was running a programme for kids … and then Lynnie’s name seemed to be everywhere. In fact, she seemed to have exploded onto the scene. 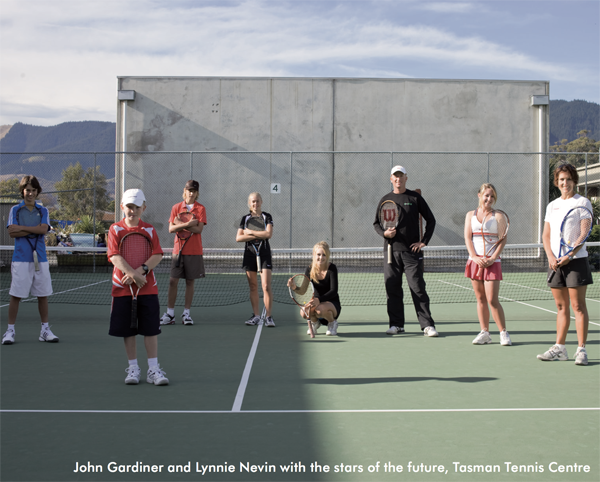 Her first very canny step was to offer a couple of free coaching weekends to some 2,500 school-kids and, as a result, the courts were swarming with them. They were aged from about 5-13 years and just loved it – happy kids and lots of happy parents! Lynnie has a way with kids (and adults too, incidentally). She makes tennis fun, is incredibly supportive and positive, and is an amazing role model. She looks absurdly fit and happy in her job and her attitude is infectious. Actually, just being in her presence seems to make people feel fit and happy.

The thing is, Lynnie’s aim is not to find protégés and turn them into Wimbledon champions (although I’m sure she wouldn’t mind if she stumbled across the right candidate) but she makes the game inclusive even for those with virtually no ball sense. Unlike many coaches (and some tennis parents for that matter), she doesn’t need that sort of reflected glory. Her aim is actually to get as many people as possible, young and old, involved and out there enjoying the game. She has had an incredible effect in the short time she has been here. In just three years since she arrived on the local scene, new courts have been built and there are programmes galore. Coaching programmes are now being offered at Motueka, Mapua, and Tapawera; the Golden Bay club membership has gone from zero to over 100.

In fact, if Lynnie did find a potential champ, she’d probably do something like pass them onto John Gardiner, our regional coach who handles the really serious stuff (or to be more precise, he runs the Nelson Bays Tennis Association Regional Development Programme). John’s one of those strong silent types who naturally commands respect – I suspect the juniors are more than a little in awe of him. Some friends of mine who live in Christchurch fly their boys up for regular coaching because they approve of the way he teaches them not just how to play and compete, but to do so with grace.

The press goes on about lack of success at international level, but what would we rather have; one Wimbledon winner (which, granted, would put NZ on the sporting map) or a whole community of kids in sport and staying out of court? Well I suppose if we were really honest, it would be nice to have both.