Nadal, the King of Clay, Does it Again

Posted on June 9, 2022 by Katrina in Uncategorized | Leave a comment 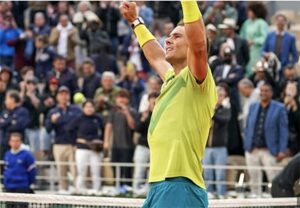 Rafael Nadal triumphed for the 14th time at the French Open tennis Grand Slam in Paris on Sunday. That is impressive enough — but the fact that he did it on virtually one foot is positively absurd.

Nadal has always been injury-prone. His future was more or less written off about 10 years ago, when he appeared on court with permanently bandaged knees. Miraculously, those bandages came off after a couple of years and he was raring to go again. Last November, he was on crutches with a chronic foot injury. He was actually diagnosed back in 2005 with Mueller-Weiss Syndrome, a degenerative disease which causes intense mid-foot pain. He is now 36 years old, so he’s been living with this for a significant chunk of his career.

He came off those crutches to win in the final set of the most incredible comeback match against Daniil Medvedev in January at the Australian Open. He was two sets to love down and I almost turned off the telly, but when I saw him fist-pumping after winning one exhausting rally I changed my mind. When a player fist-pumps like that, it indicates that they think they are still in with a chance.

Novak Djokovic, the world number one and Covid jab refusenik, was scratched from the Aussie Open for not being vaccinated, so many saw Nadal’s win as a touch hollow. But his Paris triumph put paid to that thought, since he beat Djokovic in the quarters.

This year, Nadal was accompanied at the Roland Garros event in Paris by his doctor, who administered numbing injections in the player’s foot prior to each match. How do you play a match with a numb foot? Wouldn’t you keep tripping over? In the case of Rafael Nadal, obviously not.

On top of all this, Roland Garros is considered to be the most gruelling of the four Grand Slams. Two weeks of best-of-five set matches on the powdery red European clay where the rallies can feel interminable, Nadal managed to slog his way through a four-and-a-half hour match against the 21-year-old Canadian Felix Auger-Aliassime in the fourth round. Having defeated an opponent almost half his age, he won another four-hour marathon against Novak Djokovic and then found himself up against the 25 yr old German, Alexander Zverev in the semi-final. At 6-2 down in the tie break in the first set, Nadal came up with some extraordinary retrieving and saved the set points – he simply refused to wave the white flag. By 6-6 in the second set, the match had been going for over three hours. Based on that, it could have gone on for nearly seven hours. The fact that the German twisted his ankle and retired at that point surely saved the Spaniard.

And in the final, he beat the Norwegian, Casper Ruud, in three easy sets. It looked like a hop, I mean walk, in the park compared to the previous endurance tests.

Many were waiting with bated breath at the winner’s speech, half-expecting Nadal to say that he was finally going to retire after winning his beloved French Open. But no, not a bit of it. He wants more. He wants to play at Wimbledon and then the US Open in September. If he wins those, and it’s not totally out of the question, he will win the coveted Calendar Grand Slam, last achieved by “Rocket” Rod Laver back in 1969.

In the meantime, Nadal is now ahead in the Grand Slam race on 22 titles. Novak Djokovic needs another three Slams to overtake him. Novak is younger and seems far fitter than Rafa, but who knows whether the likes of the new 19-year-old Spanish wunderkind Carlos Alcaraz will be too much for him. The Serb may have missed his chance. If he has, he will surely rue his insistence on refusing that Covid jab which scuppered his chances of a title in Australia.