A Peshawar Burqa and the Fate of Afghan Women

Yep, that’s me — under what’s known in English as a “pinhole shuttlecock burqa”.

I bought the burqa some 20 years ago at the market in Peshawar. Most of the population of this city in Pakistan, close to the border with Afghanistan, are ethnic Pashtuns. In those days, what few white women visited the town could freely wander round the market. I say freely, but we did have a male escort, a burly Pashtun who was visibly embarrassed when I asked him to negotiate for that burqa, alongside an Afghan tea cosy. Peshawar seemed impossibly exciting then, like something out of the Wild West.

When we first arrived, I was horrified by the sudden sight of women in burqas like this. Those who weren’t out shopping were being jolted around, bumping shoulders in the back of battered Suzuki jeeps, seemingly peering out at us. Their garb gave them an appearance of capture, of strange exotic creatures. 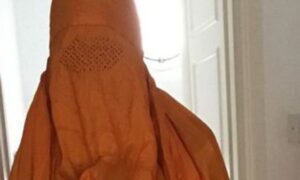 Men stared through our car window, wide-eyed. It wasn’t a look of lechery, more one of astonishment at the sight of a white woman with her head uncovered. Within about twenty minutes, I was quite used to the sight of those women, no longer shocked — except the fact that I was no longer shocked was in itself shocking to me.

Seven years on, the nearby Durra weapons bazaar — where we ’ d previously wandered around checking out the AK47s — was now off-limits and the Taliban was in control of Swat valley. Peshawar now felt menacing rather than exciting. Our guard casually waved his loaded weapon around with every passing bump in the road. We barely walked around and a stroll through the market was no longer an option.

On my next visit, driving up the Khyber Pass, we had armed vehicles back and front. Once in Peshawar, we didn ’ t even step out of the car.

On that final visit, I was asked to wear a head covering and the effect on me was quite overwhelming. I felt somehow ashamed. Ashamed of being a “ mere ” woman, I suppose. A local man in the army barracks asked me a question and I found I couldn ’ t meet his eyes. I also thought, is he really interested in my opinion? And that was me as a privileged, Western-educated white woman. And this was just a head covering. I can ’ t imagine how I would have felt in one of those burqas.

Is this now how it’s going to be for an educated Afghan woman left in Kabul or other Afghan cities? How long is it going to take for them to feel equally ashamed of themselves, along with a sudden sense of inferiority? Not very long, I imagine.

And with the new influx of Afghan refugees, I wonder how long it ’ s going to be before we see these burqas on the streets of London and Bradford? Also not long.

For many people in this country, that would be a step too far. But would our Government have the guts — or even the willingness — to ban them?