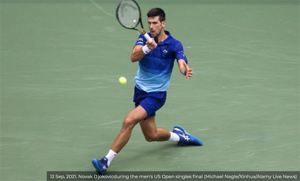 But what happened was a whitewash. Djokovic just folded, handing the title to Daniil Medvedev, his Russian opponent, in straight sets:

Djokovic made 38 unforced errors. To say that’s uncharacteristic is a massive understatement. Back in January, he had humiliated the same opponent in straight sets at the Australian Open final, where he conceded just nine games.

So what happened? Djokovic may have played in lacklustre fashion, but his opponent played lights-out tennis, hammering down ace after ace, running down every dropshot and refusing to be beaten at the baseline. His massive power on the fast court was just too much for the Serb.  Novak tried every tactic he could come up with, including serving and volleying to keep the points short, but his opponent blasted shots at his feet. The Russian player was relentless.

Also unusual was the fact that the crowd was rooting for Djokovic throughout. He is rarely the crowd favourite. But they wanted to witness history being made. They tried their best to get him through, with a huge number cheering Medvedev’s double faults (of which there were a number, since he treated his second serve as he treated his first, in terms of velocity) and booing him as he attempted to serve out the match.

At the final changeover, Djokovic’s emotions got the better of him. He sobbed into his towel and then came out with blurred vision in an attempt to deal with Medvedev’s last service bombs.

Djokovic was emotionally and physically exhausted from the outset. He tamely lost his first service game and never recovered. We were all expecting a typical Novak comeback, but it never happened. He’d lost six sets en route to the final, including two against Alexander Zverev in a gruelling five-set semi-final, the man he lost to at the Olympics.

Medvedev, conversely, breezed through the tournament in Novak-style fashion, with the loss of just one set.

On the winner’s podium, Medvedev apologised to the crowd and to his opponent for spoiling the party, but he must have been filled with huge relief at finally claiming his maiden Grand Slam.

So, Djokovic, Nadal and Federer are still tied on 20 Grand Slam titles apiece, a pleasing symmetry since it’s hard to tell these men apart in terms of greatness. But this was surely just a blip from the Serb who, until Sunday night in New York, has totally dominated the game throughout the year. It seems unthinkable that he won’t win another Slam. If and when that happens, I imagine the majority of fans will hail him as the GOAT (greatest of all time).

I bet the tournament organisers had a massive celebration up their sleeve to hail the Grand Slam hero and probably some elaborate trophy to commemorate the event. That trophy will need to go back in the cupboard. It may be some time before it comes back out.