Wellness in the Workplace – the Rise of the Culture Manager

But what exactly is Culture Management? 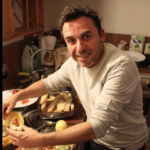 “It’s a fairly new concept in the UK,” Danny explains. “Big business used to be just about profit but employees want to feel more connected. Companies are now realising that if they just continue to base their success purely on finances, they won’t succeed. The role of the Culture Manager is to make everyone, from the receptionist to senior management, feel they’re part of the organisation.”

“So, how are you going to achieve that?” I ask him.
“Well, I’ll be getting in guest speakers to talk on subjects such as sustainability, put on events, food workshops, or perhaps get people to try out a new recipe together from one of his books, using his food products. And every month the whole company will get together and we’ll bring in a chef from one of his restaurants to cook for everyone.”

“I want to get everyone to know one another and have a fuller understanding of how the company works.”
“We’ve just moved into a most wonderful office space so, finally, all 190 staff are under the same roof, and the job has really come out of that.”

I meet with Danny at the new premises in North London, just round the corner from the Arsenal football stadium. The first thing that hits me as I walk in is a huge kitchen, all stainless steel and marble. The place feels like a large cafe, staff hot-desking or lounging on sofas. How does anyone get any work done I wonder? It all looks like far too much fun.

Upstairs are the management offices where I come across two more kitchens. Chefs are testing out recipes for the next book; one is stirring beef cheeks in a heavy sauce while another is making ravioli. They are cheerful and welcoming and I ask if I can take a picture. “As long as you don’t post it,” one of them says, as though beef cheeks were a new invention.

It’s a renovated Victorian warehouse and whoever designed the place has managed to retain the original feel and combine it successfully with all that stainless steel. Small offices bear the names of chefs on their windows. There are the Delia Smith and the Elizabeth David rooms, their names written in heavy traditional typeface.
White Victorian mosaic wall tiles are covered in red pen scribbles. I initially think they are graffiti but they are notes from presentations. Again, it creates a feel of blending the old with the new and it’s a rather pleasing touch.

Everyone is casually dressed and there’s a relaxing feel to the place. Danny is wearing jeans and a tracksuit top. Thick hair, a set of perfectly-aligned teeth, a bit of stubble and trendy black glasses, he looks no-where near his 53 years. He has a permanent grin on his face as though he can’t quite believe his luck.
I take a snapshot of him standing proudly by an easel on which sits one of Jamie’s books, an arrangement of pumpkins in front of him. He beams at the camera. I get the impression that he rather likes having his photo taken.

Danny grew up on his grandparents’ farm on the Australian Gold Coast. “My dad used to make me kill the chickens, chop their heads off, pluck them, gut them, boil them. I grew up surrounded by good, healthy food and with a real sense of community, so it’s an ideal role for me.”

Growing up with that sense of community has helped him in his other role within the organisation. He has been involved since the beginning with Jamie’s restaurant Fifteen, which, a bit like those prison restaurants such as The Clink, helps disadvantaged youths, whom he mentors. He is also involved in Fifteen’s graduate training scheme, helping them move onto jobs within the restaurant trade.

Danny is also involved with the Italian drug rehabilitation community, San Patrignano, on the Adriatic coast, which houses some 1,300 residents. It’s a bit like a kibbutz without the religious element. Danny set up the UK side and helps British residents enter the programme.

San Patrignano is like Fifteen on a much larger scale, training the residents for work placements once they have left the community. There is a strong connection with Jamie’s Fifteen, in that a number of them are later employed by the restaurant.

When Danny describes himself, he says, “I feel young, centred and happy. It used to be easy for me to slip into feeling a bit despondent. I’ve grown immensely as a person through Jamie’s support and trust. There’s a real sense of security working for him.” And then he says something rather strange. “I feel elf-like.” I ask him if he is alluding to his height (he’s 5’3”). “No, no. It’s just that I feel light and compact. I’m happy.” I wasn’t aware that elves felt light and compact but I vaguely understand what he is driving at.

Danny clearly looks after himself. He eats well, plays tennis four times a week and he has run several marathons. He tells me that every morning, before leaving for work, he practices 10 minutes of mindfulness and carries on doing so on the packed tube on the way to work. “If someone bashes into me, I choose not to get angry. I’ve learned that from Jamie. I’ve seen him under huge pressure and still able to remain calm.”

I get the impression that he has read a large number of self-help books and ask him about that. “Oh, I used to read every one going but I don’t feel the need to do that any more.”

I’ve no idea what he earns but he doesn’t seem particularly motivated by money. “Of course I need to look after my future but I don’t need to earn a fortune to make me happy.”

I leave with the impression that it wouldn’t be hard to be happy working for Jamie.