Posted on November 25, 2020 by Katrina in Lifestyle articles, Travel, Uncategorized | Leave a comment

When Katrina Allen left her comfortable London home to volunteer as a translator in Greece, she had no idea how life-changing it would be.

It’s on my sixth night on the Greek island of Samos that things really become tense. I’m at my apartment when the phone beeps: “Get down to the medical centre. There’s a massive fire in the camp.” It turns out that it’s the result of a fight breaking out between Syrians and Afghans over somebody jumping the food queue. Gas canisters are now exploding like bombs, echoing around the hillside. Hundreds are trying to flee the refugee camp, including terrified families with small kids, only to be tear-gassed by the police attempting to contain everyone. Later I’m told that a girl went into labour — thankfully, they managed to get her to hospital.

The fight continues the next night while families huddle on the waterfront, too scared to go back to the camp. A couple of days later there’s a protest in town. The locals want the refugees transferred off the island. I don’t really blame them. It no longer feels safe here. I stick to the main, well-lit waterfront and try to remind myself that only a few weeks ago, while coming home from Camden in north London, I witnessed a policeman giving CPR to a man who had been stabbed. London friends keep emailing me, saying how brave I am. Yet despite the turmoil, it occurs to me that I am not missing home.

Situated only one mile off the coast of Turkey, Samos houses one of five “hotspot” camps established by the Greek government to cope with the influx of migrants arriving in plastic dinghies manned by people smugglers. Its medical centre has been servicing the refugee camp since it was established in 2016 and just how urgently they required a French translator became apparent to me the day after I applied to Indigo Volunteers, a sort of matchmaking outfit linking NGOs with appropriate volunteers. They wanted me to come immediately.

I hadn’t expected this to happen quite so quickly. Looking around at my comfortable London home, I asked myself did I really want to go and work in a refugee camp? It could be an amazing adventure, but then it could be depressingly awful. Then I looked outside the window at the gentle drizzle and decided that I did.

My friends were intrigued by my forthcoming adventure, but no one tried to dissuade me from going. Quite a few were rather envious, saying: “I wish I had the time or guts to do something like that.” 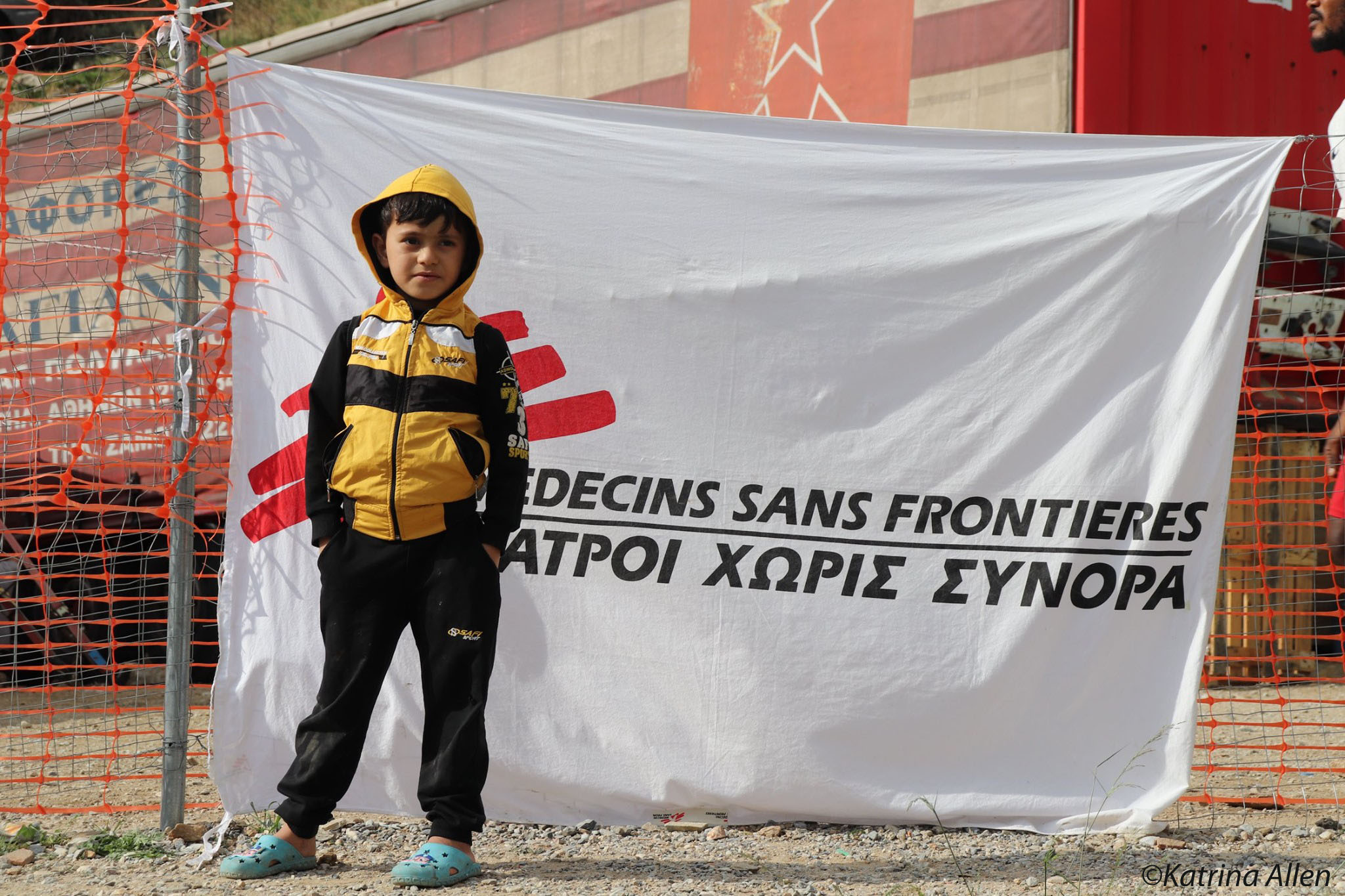 Until this point I’d had a pretty varied career, always self-employed: a luxury food business, a café traiteur and a custom framing business in London. As a former top real tennis player

I’ve also travelled extensively, competing in tournaments. But in the past few years my life had been more sedate: playing club tennis, strumming with the ukulele ensemble and doing a bit of lightweight local volunteering.

Then in September, with the dreaded London winter on the way, I decided that I wanted to get away for a couple of months. A few years back I had helped to distribute donations in the Calais Jungle refugee camp after meeting a woman who had done the same. It occurred to me that I could offer my services again. After all, if I worked in a refugee camp, I wouldn’t need to hunt around for a travel companion.

My plan is to stay until the end of October, although I leave my return date open. Oddly, I’m not at all nervous. If anything, I feel excited. Perhaps too excited. While waiting at Athens airport, I’m so intent on studying obscure French medical terms such as kidney stones and gall bladder that I manage to miss the connecting flight and am forced to fly out the next day.

Arriving on the island is surreal. The sunlight is dazzling — I wish I’d packed my sunglasses. The flat that I have rented on Airbnb is wonderful, with a sea view and a terrace in full sun. Yet I know that only ten minutes’ walk away is the camp, full of people who have lived through so much trauma, crammed together in tiny tents.

When people think of Greek camps, they immediately think of Lesbos. Yet Samos, which houses thousands of refugees, is so much closer to mainland Turkey, that it’s relatively easy to get across. That’s if the dinghy doesn’t sink or the Turkish coastguards don’t get to you. Smugglers charge about €1,000 to take people over in those packed dinghies. If they are caught and returned to the mainland, there is no refund.

On my first day at the medical centre the reception area is so packed that I can hardly get in. The sound of hacking coughs from patients and volunteers fills the air. “I hope I don’t get sick,” I say to one of the doctors. “Oh, but you will, 100 per cent you will,” he replies.

Most of the refugees are Syrian and Afghan, and I’m surprised to discover that a sizeable proportion are from Congo, which is where my French comes into play. I’m thrown in at the deep end, translating in the consulting rooms. I’m relieved to find that my French is up to it, although I do get a bit stuck on a couple of phrases.

I’m shocked by the descriptions of the dreadful conditions in the camp and I’m also appalled at some of the stories I hear, what the refugees suffered in their home countries, how they managed to escape, the gruelling trip to get to the island. Chatting to refugees and volunteers, I come across repeated stories of gang rape, torture, terrible flashbacks and nightmares. So many of the women have children conceived of rape; many of the assaults took place in Turkey on the long trek down from Istanbul to Izmir on the coast.

At one point, while I’m taking a break outside the clinic, a Kurdish woman approaches. She is with her two boys, aged five and ten. She explains that her husband has stayed behind in the “safe zone” to document what’s happening there and shows me some awful photos of kids with bloodied faces. She tells me: “The Turks are using chemical weapons. The world needs to know what’s happening to us.” Later she sends me some videos; they are unbearably violent.

Talking about their experiences tends to result in the refugees reliving the trauma and tears usually flow instantly, although a few seem completely numb and dissociated. One boy breaks down in heaving sobs. I end up crying with him.

After the night of the fire the refugees begin to protest about conditions at the camp. Hundreds are transferred to the mainland. The buses pick them up in the middle of the night to take them to the Greek warship waiting in the port and there are skirmishes among those trying to clamber inside. Every day more boats carrying refugees arrive. 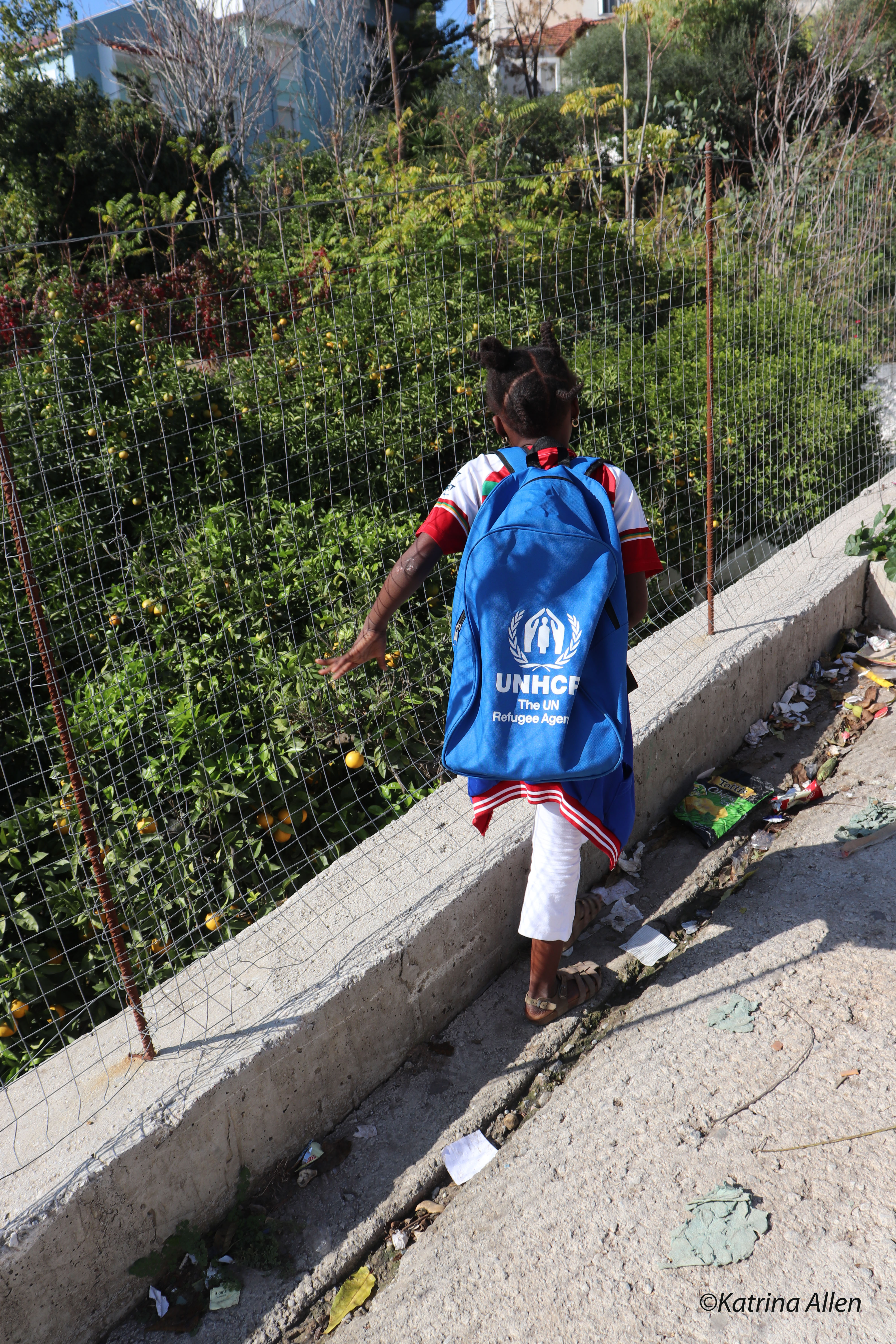 The work is intense, but I feel so energised. I’m learning a few Farsi expressions to at least communicate at a basic level with the Afghans, as well as Arabic and Greek, and I know so much more about medical matters about which I previously knew nothing. I decide to extend my stay until the third week of November.

I’ve chosen to be quite solitary. Although there are a couple of medics I’ll keep in touch with, we barely get a chance to forge close friendships at the clinic. I don’t feel lonely, however. I’ve settled into a routine. When I get back to my flat after a day’s work,  I write, read, catch the six o’clock news and strum my ukulele, which I brought with me. Then it’s bed at 10pm since I’m often up at six. There’s even a local cat that jumps through the window when I get back from work and sleeps on my bed. I have him hooked on tuna and he yowls every time I open the fridge door.

By the start of November the wind is beginning to bite. Between January and March there are monsoon-like downpours and the weather is bitterly cold. The camp is on the hillside, unprotected from that wind. I simply can’t imagine how the refugees will cope in their lightweight summer tents. What, I wonder, will it be like for me going back to “normal”? Having seen what I have, I’m not sure I will be able to entirely.

When I return to freezing London it feels somehow foreign. On my way home from the airport I spot a man playing carols on a violin. Somehow I’d forgotten all about Christmas. I expect Samos to start to feel like a distant dream, but it’s in my mind all the time. They say you get the bug and I suspect I already have it. It has been exhilarating yet shocking. It has also been life-changing. I know I’ll be involved, if not in a camp in the immediate future, then at least in raising funds and awareness.