And then something extraordinary happened. He got himself disqualified for hitting a lineswoman on the neck during his match against Pablo Carreno Busta.

OK, he didn’t mean it but it was a bit stupid not to be aware of where he was whacking that ball, knowing full well that there were line judges and ballboys behind him.

Imagine the uproar if the stadium had been full. It would certainly have spiced things up. In the event, he just shook hands with his opponent (hasn’t he heard of social distancing?) and walked out of the empty stadium.

He left in his courtesy car, unwilling to face the music at what should have been his press conference, instead apologising over social media. It seemed a cowardly way of handling the situation.

This follows on from the fiasco of his hosting the recent Adria Tour, where players were mixing mask-free in close proximity with fans, playing football and dancing in sweaty nightclubs. The upshot of that was that he was struck down with Covid-19, as was his wife.

Grigor Dimitrov, Borna Coric and Viktor Troicki were also diagnosed with the virus. When the media challenged him on his handling of the event, his response was “If I had the chance to do the Adria Tour again, I would do it. It’s like a witch hunt.” 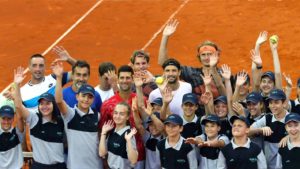 On the eve of the US Open, he fronted a controversial breakaway players’ union, with somewhat insensitive timing, during a fortnight when the tennis world was finally back on its feet. The USTA really doesn’t need that kind of action from a leading player right now. It’s interesting that neither of the other two top players – Nadal and Federer – signed up. Many other players were also critical of his action.

Nadal and Federer, who are clearly very close, haven’t actually said they dislike Novak but I imagine they aren’t fans. You certainly don’t see them fooling around in YouTube clips with him as they do with one another. And just witness the rather lukewarm handshake between Federer and Djokovic at the end of that incredible match in the finals of Wimbledon last year.

Novak so badly wants to be loved by the public in the manner of Nadal and Federer and can’t seem to understand why he isn’t. Well, it has a lot to do with behaviour such as at these latest incidents. McEnroe’s response was: “He’d better get used to being the bad guy”.

Johnny Mac certainly knows a thing or two about that.

* Katrina Allen is a former Junior Wimbledon player and former world number one at the original game of Real Tennis.