Djokovic has left the tennis world to pick up the pieces 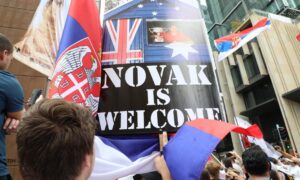 The Novak Djokovic debacle is finally done and dusted. He is out — deported, visa revoked for the second time, with the threat of being barred from entering Australia for the next three years.

After the decision, Djokovic stated: “I am uncomfortable that the focus of the past weeks has been on me and I hope that we can all now focus on the game and tournament I love.”

Except that Novak has so far more or less destroyed the atmosphere of what ’ s known as the “ Happy Slam”.

Everything in the news has been about him in the past 10 days. Results and triumphs in Adelaide and Sydney have been completely overshadowed in the media.

The tournament organisers held off announcing the Australian Open draw for as long as they could, but that wasn ’ t exactly fair to the other players who were keen to know their schedules; which day and session they were to play on in their opening match and, indeed, who they were actually playing against. Because of this debacle they were robbed of vital preparation in  scouting out their opponent and planning appropriate tactics.

Initially, it was assumed that, according to the Grand Slam rulebook, if Djokovic were withdrawn:  5 th  seed Andrey Rublev would take his place at the top of the draw, Gael Monfils, the 17 th  seed would take Rublev ’ s place, and Alexander Bublik would become the new 17 th  seed. This would have meant that those in the affected spots would have had no idea of who their opponent was until the last moment. Talk about chaos — and talk about unfair to those players. I wonder if Novak will acknowledge that this has all been down to him. Probably not.

Thankfully the draw hasn ’ t actually been changed, which must be a relief to many, except that there is now a whopping hole where the number one seed would have been. It looked to be a shoo-in for Djokovic to reach the quarters before confronting any serious opposition. Now, players such as 12 th- seeded Cameron Norrie and 17 th- seeded Gael Monfils must be licking their lips at the prospect of going deep in the draw before, in all likelihood, coming up against Rafael Nadal who is seeded number six.

And now Djokovic is out, Nadal has a real chance of overtaking him in the race for Grand Slam titles. Nadal, Djokovic and Federer are equal on 20 and it was generally assumed that the Serb would win the Australian Open and surpass them and would thus be seen as the greatest of all time. If the Spaniard wins this Slam and then the French (his favourite) in May, he would be on 22 and Djokovic might well find it hard to ever catch up.

In fact, the French are also pretty tough on the subject of vaccination, so he may not be allowed to play there either. And who knows what will happen at Wimbledon.

All this through refusing to be jabbed. Djokovic may be a man of principle, but this is one hell of a sacrifice.