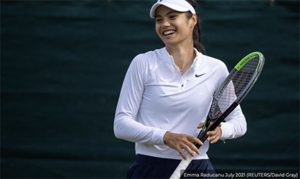 One thing that seems to have helped her is that her opponents appear to have been riddled with nerves against what now seems to be a carefree youngster. She came out onto the main stadium for her match against the home favourite, Shelby Rogers, smiling and waving at the crowd. And then she breezed through in a 6-2, 6-1 whitewash. Rogers had beaten the number one seed, Ashleigh Barty, in the previous round — so this was pretty unexpected.

Next up for Raducanu in the quarter-finals, however, was the Olympic gold medalist and 2019 US Open semi-finalist Belinda Bencic , who was seeded 11th. Surely not again?

And yet, the   British girl   runs out the winner, again in straight sets. This time I see it. She ’ s astute – she picks out the Swiss player ’ s weaknesses – and she sends some screamers down the line, a shot she clearly favours.   And she knows when to go back behind her opponent. She also takes the ball early, gets down low and is beautifully balanced. As an 18-year-old, she ’ s lightning fast. And once again, she ’ s traded on her opponent ’ s nerves.

By tomorrow morning we will know whether Raducanu has done it again against Maria Sakkari of Greece, seeded 17th. Viewers in the UK can watch it live on Amazon Prime. If she wins, she will play the winner of the other semi-final between the Canadian Leylah Fernandez and Aryna Sabalenka, the number 2 seed from Belarus.

British tennis fans are going nuts. It’s just as well she is in the USA, away from all the UK hype.

So, what next for Raducanu? Can she sustain this form? Without all the media pressure on her home turf, Emma seems to be running free. Who knows what may happen?