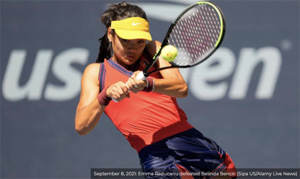 So it’ll be fascinating to see who deals better with the situation in the final. Will it be the left-handed Canadian or the right-handed Brit? A leftie vs rightie usually makes for an interesting contest and this could be an intriguing future rivalry – think Navratilova vs Evert, Lendl vs Connors, Borg vs McEnroe. The swinging leftie serve can be a nightmare for opponents but Raducanu has the benefit of a left-handed coach in Andrew Richardson, so she will have had plenty of practice.

Brits are rubbing their eyes in disbelief at the rise and rise of Emma Raducanu. Just a few months ago, prior to Wimbledon, she was ranked 343 in the world. If she loses in the final, she will be ranked number 32. Should she win, she is projected to reach number 23 and guaranteed a seeding at the Aussie Open in January. No more qualifying or scrabbling around at minor tournaments for Emma Raducanu.

And consider some of these statistics. Emma Raducanu is the:

One wonders when she’ll wake up to the enormity of what she’s achieving. In the meantime, it’s one hell of a story.