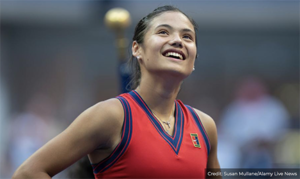 The Canadian had beaten Elina Svitolina and Aryna Sabalenka, both top five players, in tight three-setters in her two previous rounds. Raducanu, on the other hand, had won every single match, including her qualifying ones, in straight sets. There was some doubt as to whether she was sufficiently battle-hardened to take the title.

And yet she coped with the immense pressure and ran out the winner. This was serious edge-of-the-seat stuff. The outcome was in doubt right until the last ball was struck. As she served for the title at 5-3 she went 30-40 down and then gashed her knee on the court — at which point, play was suspended for a medical time-out. It was a moment of intense pressure but she came back out onto the court, saved the break point and went on to serve out the match. That took some guts. Her congratulatory message from the Queen was well deserved — but typically this modest young woman does not take anything for granted and seems to have a knack of saying the right thing. (She will have HM’s herogramframed, she says.)

Enjoy the moment while you can, Emma, because in the words of the commentator Greg Rusedski you will now be a “scalp”. They will all be gunning for you.

Expect a come-down after this extraordinary display, because there is no way she can keep up this level on the tour events week in week out.

But she will now be seeded at the Australian Open Grand Slam in January and that’s when she will need to pick herself up again. It’s what the greatest players do in the majors.

Her US Open prize money of £1.8 million will now be dwarfed by sponsorship deals. She’s already been snapped up by IMG, the giant sports management agency. By this time next year, she will be worth many tens of millions and under enormous scrutiny.

And let’s see what happens when Wimbledon comes round again. That will be a whole new level of pressure. Let’s not forget, she retired with what appeared to be a panic attack at this year’s tournament. I’d like to think the press will be kind to her at next year’s Wimbledon, but on past performance that’s unlikely.

In the meantime, Britain should be declaring a public holiday. What about it, Boris?